I often give Barker snacks in little bowls and over time I started setting him up with his snacks on an end table shelf by his toddler chair.
Now whenever I get him a snack he knows that is where it will be set up and he follows or leads me there while I set it up.
Today I tried letting Barker carry his own bowl. I placed it in his hands and let him go. It was super cute and impressive to watch him slowly and very carefully carry his bowl of Cheerios (apple cinnamon) into the living room and to his special end table spot. Then he sat down to enjoy his snack and watch the morning news with a big, proud smile. 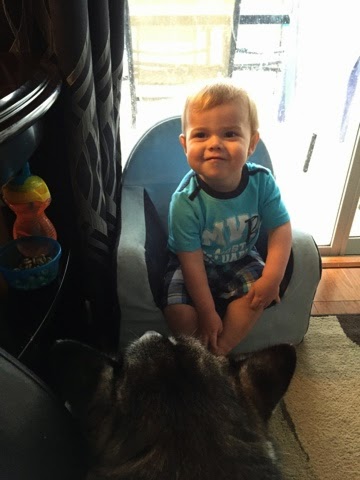 Hehe love him. And of course Sahara is always nearby.
--Don't forget to click the TMB logo to the right as a vote for my blog!--
Written by Shara Lynn Harrison at 5:16 AM No comments:

On Saturday morning I had just gotten Barker and I settled for breakfast when I checked my phone and saw that I had missed a very important text two hours before. My sister-in-law was possibly in labor!

An hour later it was confirmed that she indeed was in labor and this little girl had decided to make an appearance about 2.5 weeks before her due date. (She couldn't stand to miss this beautiful Florida weather anymore!)

After what felt like a long day of waiting and texting (it's hard being on the other side! hehe) we finally got word that our third niece (and first in Florida!) has been born at 6:40PM!


Emerson Elizabeth Harrison weighed in at 6lbs 9oz and is 19.5" long. She also has quite a bit of hair.

I got to hold her just a few hours after her birth and Barker got to meet his newest little cousin. 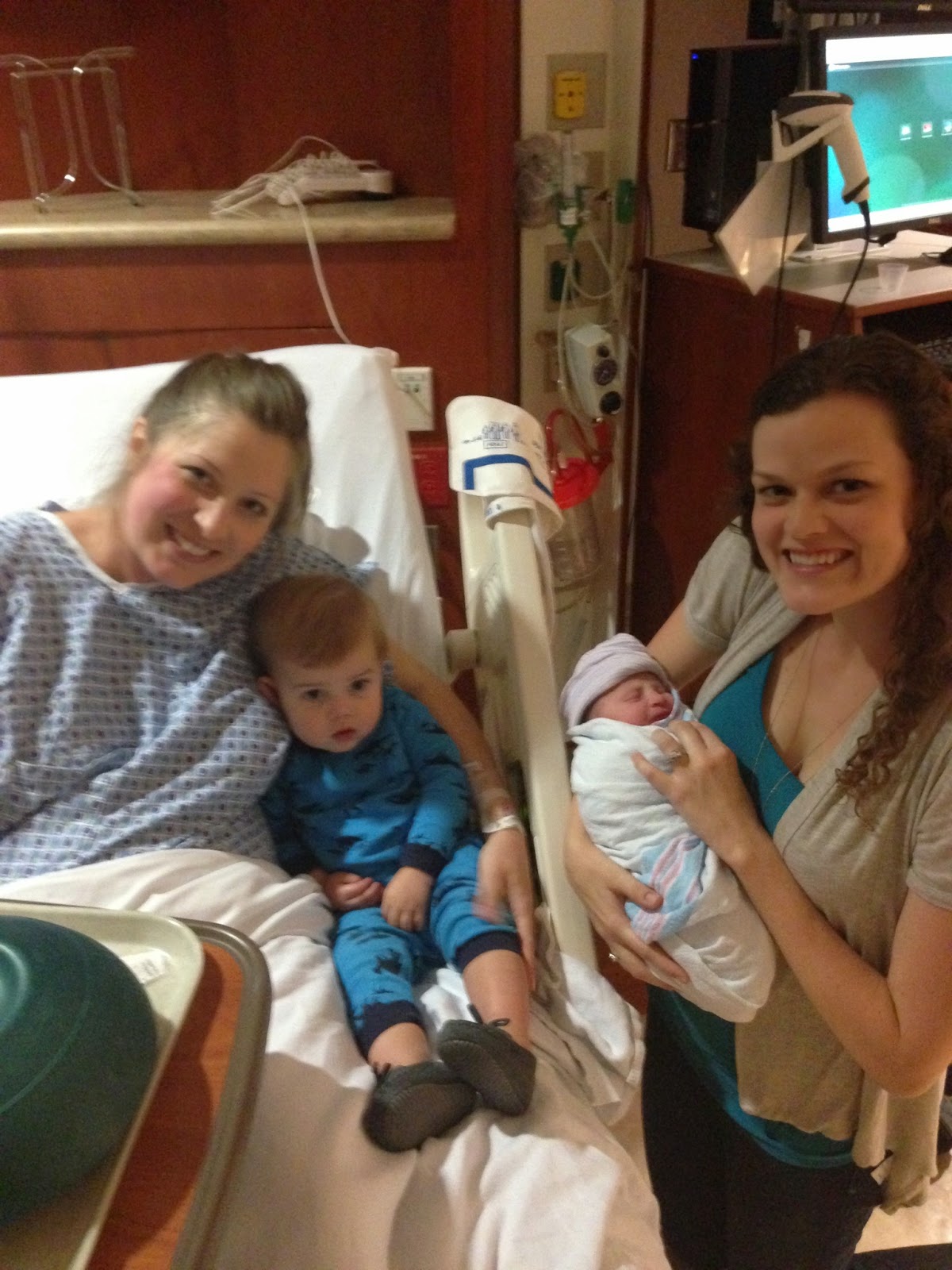 Here is Aunt Hannah holding my oldest while I hold her oldest! =) Barker was in his PJs and slippers, it was a bit past his bed time. ;)

It's so exciting to finally have a niece growing up near by! The whole exciting experience has always made me even more excited about our next little one that will be coming in 5 months. =)  (Oh did I mention I'm pregnant and due September 19?)

Written by Shara Lynn Harrison at 3:56 PM No comments:

Well we are serving our first all family illness. The stomach flu.

It started with Barker on Monday, got to me Wednesday and finally got to Brett last night.

Barker was quite the trooper even when he couldn't understand why he couldn't be with Mommy Wednesday night. He fell asleep at the bottom of the stairs missing me. The poor baby. 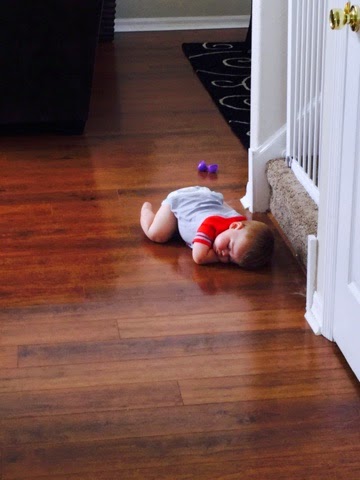 But the next day I was feeling up to sickie cuddles and cartoons on the couch. 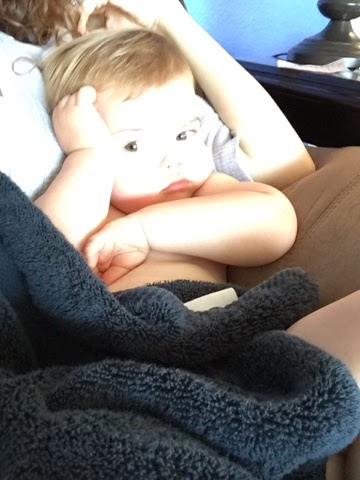 Brett is certain he deserves a World's Greatest Dad mug after taking care of us only to then get it himself. Of course he now understands why I didn't feel like watching the food network yesterday.

At least Brett is recovering quicker than the rest of us.

And now my big boy toddler is learning to brush away the sick germs all by himself! 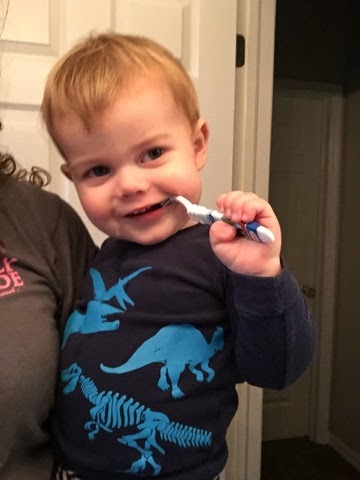 I'm so proud of this little guy.

He's super nurturing too. While Daddy was sick on the couch today he kept bringing him things like plastic Easter eggs and saltines. Hehe Always trying to help. :) You can't help but love him.

So that has been our week. It's Friday now right? Time for a restful weekend!

Written by Shara Lynn Harrison at 5:31 PM No comments:

On the way there I was a little nervous. I knew I'd be in the water with my 17month old because it is a parents and tots class, but I didn't know what to expect. Barker of course had no idea what was going on and had a nice 15 minute nap on the way there.

Upon arriving Barker was pretty excited to see so many other little people! He paced back and forth on the sidewalk just smiling and checking everyone out.

Then he saw it. The pool. He just knew he had to get in there! After being held back while he took off his flops and got in place with Mommy he was finally able to sit on the side and splash his feet while we learned about how the class would go and how we would get started today.

Then we got in! They like to start and end each class with a song that even has special pool motions where you get to kick and splash and spin around. Barker rather enjoyed the songs. There were giggles and claps. :)

Then we lined up and practiced "reach and pull" where he learned how to reach out his arms then pull them back to swim. All the while bouncing and moving with mommy to reach the floating toy we tossed in front of us. Barker really enjoyed this. :)

Then he got to be the teacher's example to learn kicks! He got very serious as he was leaned on her shoulder and she helped him kick his legs. Kicking is serious stuff! He also did very well when it was Mommy's turn to help him kick across the pool.

Finally it was time to get a taste of going under the water. (The part I was most nervous about.) The instructor made it super simple and easy though! She held Barker, counted to three, made sure he took a breath then dipped him under and guided him to me. Everyone clapped as each kid took his/her turn and there was no crying in our class of 6! Barker was a little confused by the going under the water business though. He gave the instructor a Judgy, "what are you doing?" look. Haha

Then we ended with another fun song and he was all smiles. I could tell he wanted to jump back in when it was time to leave, but we'll be back Thursday! I think this will be fun. :)

Written by Shara Lynn Harrison at 1:53 PM No comments: