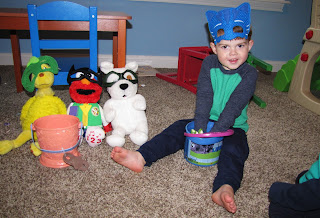 Barker thinks it's just a fun game, but in reality, it's accomplishing so much!

1. He gets used to wearing a mask
(because toddlers don't like to keep hats, masks, sunglasses etc on their heads for too long)

2. He becomes comfortable and familiar with the concept of Trick-or-Treating
(He is typically pretty shy)

3. He practices good manners and is taught what is expected from him

I often try to prepare Barker for new situations, but there are also many times I don't even think about what is completely new to him because to me, it seems normal.  How can I expect Barker to follow directions in a new setting when everything is new and overwhelming to him?

Back when Barker was an infant, I read an article about practicing opening presents and saying thank you whenever Christmas and birthdays are coming up. Basically, teaching your child to be grateful and thankful and not make faces if they don't like whatever is in the package. Now that Barker is just shy of 3, I can actually execute this idea!

First, I peaked his interest by putting masks on his stuffed animals. (And Little Brother) 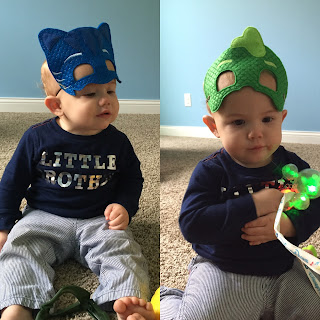 Then we got out his new bucket. (Thank you McDonald's!) 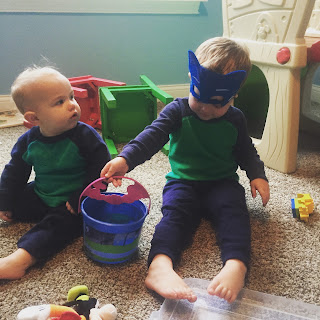 Next, I set up the closet door like a house. I told Barker to knock on the door and say, "trick-or-treat" then I would give him pretend candy. After receiving the candy, he would say, "thank you," and I'd close the door. 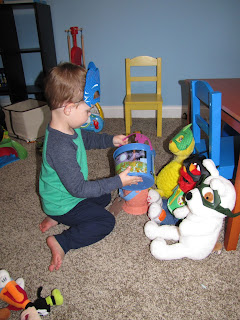 At first he just stood there. So I prompted to get him to talk to me a little. He also thought it was super fun to pretend Legos are candy and to put them in the bucket.

Next, I let Barker be the person at the door and I was the trick-or-treater. This is where he really had fun. He liked answering the door and putting candy in my bucket. Then, I started acting whiney, mean or demanding. I taught him to say, "no candy for you" if I was not nice. Naturally, that then became his favorite part. haha 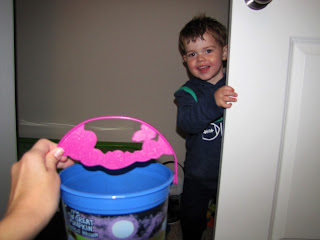 So there you go, we practiced our manners and discovered what trick-or-treating is all about. Barker has a new favorite game, and hopefully he won't be too shy as he goes out on the 31st.

Now, let's keep our fingers crossed that he is happy to be Gekko that day! Lately, he has started to choose Catboy over Gekko, but the costume is already ordered! lol We'll practice dressing up once it arrives...