The boys have actually been sleeping in until 7 lately which is awesome! I've allowed myself to sleep in right along with them. My excuse is that the 2.5yr old has made his way into our bed nearly every night so I don't want to wake him up while sneaking out. ;) 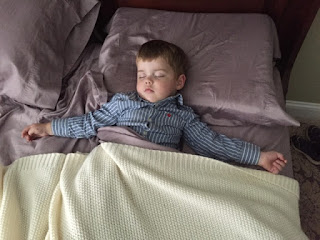 After a long week with Hubby out of town and a sick baby (most likely just a virus that is leaving him with a temp between 100-101) I decided to set my alarm and get up before the boys. I needed some alone time to start my day. Being a morning person, I find this especially helpful to start my day off on the right foot.

So I set my alarm for 6:15am.
Beckett woke up crying at 5:56am. I went in there, nursed him and got him back to sleep. By then it was already 6:15 so I went to the bathroom and started to think of what I would do with my alone time. (I had already read my Bible and prayed when the sickie baby had me up earlier in the morning.)
Unfortunately, I didn't even get to wash my hands before a little person had opened the bathroom door and groggily walked in.
Then he wanted to be held. I could tell he was still sleepy so I somehow convinced him we should go back to bed. I laid down with him for about 10 minutes when the baby let out a loud cry. Barker sat up and announced, "Beckett's waking up!" So I told him I was going to the baby and asked if he wanted to stay in bed. He did.

When I went into Beckett's room, the poor punkin was in the fetal position, facedown and whimpering. As soon as I picked him up I could tell his fever was back.
We made our way to the family room to rock and about a minute later we were joined by the 2.5yr old. It was about 6:45 by then.

For some reason I had a hard time waking up and keeping my eyes open this morning...

After lots of cries over minor incidents (like Mommy not allowing him to chew on the remote) Beckett got to go down for an early nap.

Say a prayer for the little guy and also that the toddler (who likes to chew on Beckett's teething rings and drink from his sippy cups) won't get sick too. 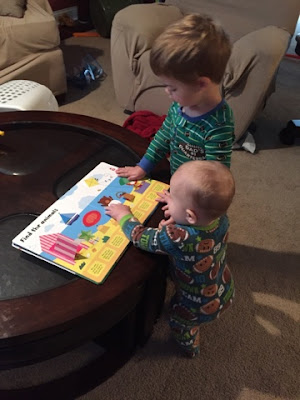 I think we are all looking forward to Daddy's return tomorrow morning.

On a Happier Note: After pretty much taking a potty training break this summer, Barker has initiated going to the potty all on his own twice in the last 24hrs!

Written by Shara Lynn Harrison at 5:51 AM