Every day Barker does something that catches me off guard or just makes me laugh. Today he did not disappoint, so here are just some of the silly/random things I caught him doing today...

He started by making another ball pit in an Amazon box I had left out for him. 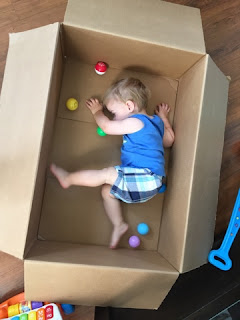 He often likes to transport his balls from one place to another to create all kinds of ball pits. And apparently no ball can be left behind. I counted 6 balls for him to play with today but he was obsessing over the one under the tv stand. So I had to spend 5 minutes fishing it out with a duster wand. (Not an easy task when you are 30wks pregnant)

At the grocery store he picked a banana to be his choice item today. 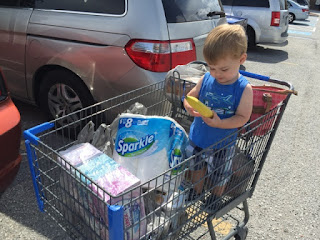 I let him hold it on the way home too. But suddenly I noticed the banana smell had become quite strong. When we got home I had this. 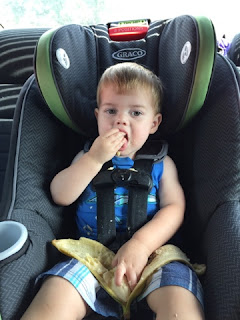 I'm pretty proud of him for figuring out how to open a banana. But his straps need some serious cleaning now. 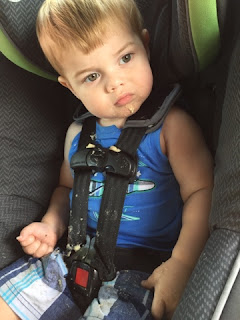 This afternoon Barker discovered new ways to play with his balls when he brought them to me in a dog bowl. 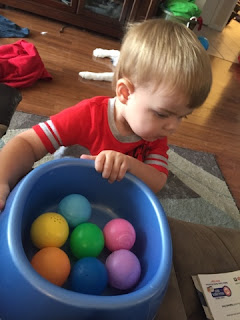 And then dumped them on me. I'm not sure why. Sometimes he likes to try and fit them all in my hands at the same time.

And finally, after dinner, I realized he had gotten rather quiet in the next room... 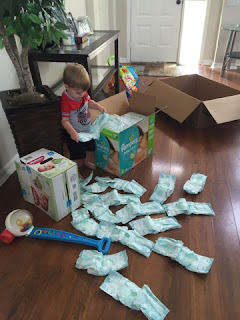 Apparently getting out all the diapers is not enough, he must also open them. Again, I'm not sure why.

So there you go. A little glimpse into our toddler adventures. Any guesses as to what is going on in his head? :)