I Got my Toddler to Eat Something Green!

Lately we've been working on getting Barker to eat the same things we eat at meal times. He was starting to get picky and not try new things so I figured it was time to push him a little.

The first food Barker decided he didn't like was green beans, when he was 10months old. Since that time he has also lost interest in many vegetables.
Over Christmas though I discovered he will eat things that are round like a ball simply because he likes balls. Haha

Last week I actually planned and cooked all our meals from scratch! I guess the cooking shows we've been watching have inspired me. I think I'm finally catching on to cooking without the need of a recipe... (makes it feel less like work)

Anyway, I decided to try a version of something I saw on tv. In the food processor I blended spinach and mozzarella cheese. Then I mixed that with 4 eggs and added a little vanilla almond milk. Next, I poured the mixture into muffin cups and baked in the oven for around 25min.

Barker was pretty excited because they looked like cupcakes. I told him they were egg cupcakes. (I wasn't really sure what to call them but that sounded good for a toddler.)

These were obviously green from the spinach, but for whatever reason, Barker was excited to try them and he ate two! 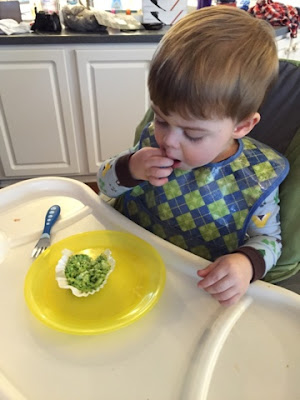 I also enjoyed quite a few myself. Now I have a yummy, easy treat to make that even gets us to eat our greens. Woohoo! I'm marking this in the win column.

Written by Shara Lynn Harrison at 11:31 AM