Beckett is 4 months old today as as of Sunday, he is on a fairly predictable sleep schedule and even napping in his own crib now! Yay! 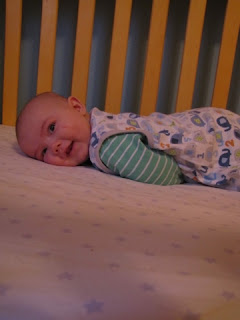 A few weeks ago we could tell he was super close to rolling from his back to his belly so I knew it was time to start weening him from the swaddle. Fortunately around that time he began to outgrow his colic.
I started with having him sleep with one arm out at night in his crib and both arms out in the swing for naps.
At the time I was putting him down fully asleep, so it was tricky getting him down without flailing arms to wake him up.
We had just gotten into a good groove when he finally rolled (complete from back to belly to back) last week. Time to sleep with both arms out!
It was tricky at first and the Saturday night I decided putting him down, fully asleep with both arms out was pretty much impossible. The next day we had to work on self soothing.

For his afternoon nap I settled him so that he was comfortable, drowsy with his eyes closed but not completely out. Then I gently laid him in his crib. He fussed and flipped, I waited five minutes then went back in to do the same thing. He went right to sleep!
Since then I have put him to sleep this way every time. Sometimes it takes a little longer than others and I've found it helps when I guide him to his tummy and rub his back, but he's doing really well!
I'm not constantly rocking him to sleep and he is napping longer.
I actually deep cleaned our master bathroom for the first time in months and I've been keeping up with the dishes!

Life is going pretty well over here. Now if I could get the 2 year old to be more consistent with his sleeping...

Written by Shara Lynn Harrison at 11:37 AM